Soccer ladder drills have been around for a long time. It’s not just something you see on your local elementary school playground anymore either.

Ladder soccer drill challenges players at every level, from youth to professional. In fact, it remains one of the most effective ways for soccer players to improve their agility, speed and reaction time. As with any sport, there’s always ways to improve your game and keep it fresh. In this blog post, we highlight some of our favorite Soccer Ladder Drills for keeping training sessions interesting and challenging your players in new ways. These drills are designed to help develop quickness and awareness as well as build stamina and endurance.

What is a Soccer Ladder Drill?

A soccer ladder drill is a type of agility ladder drill that slowly progresses to become more difficult as it progresses. These drills work on your players’ ability to think quickly, make quick decisions, and react quickly. The main goal of these drills is to increase foot speed and agility. Agility refers to a player’s ability to change direction quickly and explosively. All soccer players should have some level of agility because it allows them to change direction on the field quickly. This helps them to avoid getting tackled and allows them to keep the ball.

Why Are Soccer Ladder Drills Good For Kids?

There are many benefits of implementing soccer ladder drills in your training sessions. It is important to understand these benefits so that your players can get the most out of these drills. Some of these benefits include improving their footwork, helping them learn to see and react quicker, and building confidence. These drills are great for improving footwork because players need to change directions quickly. It is important for them to get use to changing directions quickly with their feet because it will help them be more agile on the field. These drills are also helpful for building confidence because players will realize that they are improving with each drill. 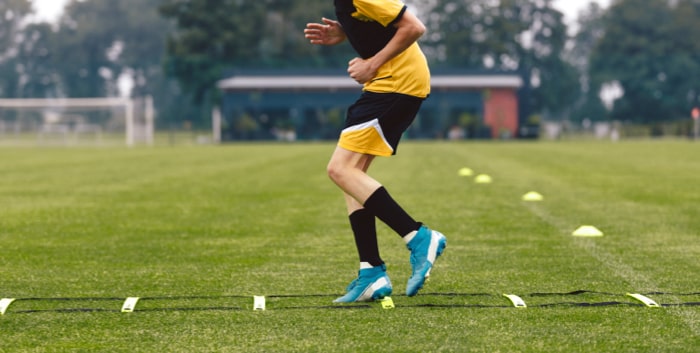 How to do a Ladder Drill

There are a few different ways to do a Ladder Drill. The most popular and common way is to start at one end of a short ladder and work your way up to the other end, with each rung being an increasingly more difficult exercise. Once you reach the top, you run back down the bottom of the ladder again and continue to do this until you’ve reached the desired amount of time spent or number of reps completed. Some coaches will use a “ladder” on the ground instead of the traditional ladder that most people are used to seeing. The ground “ladder” is simply a line drawn on the ground with numbered exercises that are performed between each end of the line. There are many different types of ladder drills that can be done with a wide variety of exercises. Some of the most common ones include: 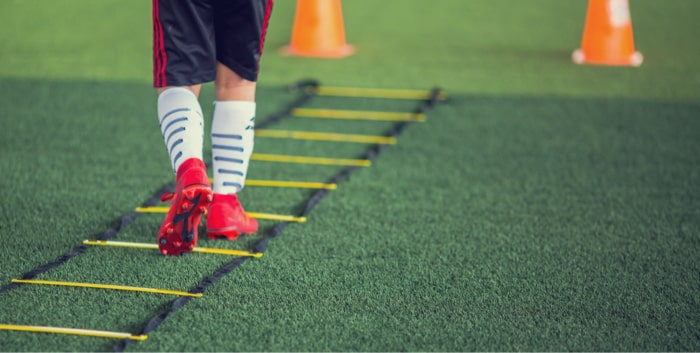 As we’ve already discussed, ladder drills can have a wide variety of benefits for most athletes. Here are some of the most important ones:

Even though agility and footwork typically aren’t the first things that come to mind when thinking about soccer, they are still a crucial part of the game. At every level of play, a player’s ability to move quickly and efficiently will determine if he or she will succeed or not. This holds true especially for youth soccer players who are just beginning their journey into the game. Why footwork is so important for youth soccer players? Because all it takes is a few inches to determine whether a player will be successful or not. Not having the footwork to properly position yourself on the field, either offensively or defensively, will hinder a player’s ability to succeed at the game.

This footwork drill is geared toward helping players improve their lateral movement. The shuffle run is a popular exercise found in many soccer training programs and is designed to help players develop the ability to move laterally while keeping the ball under control. In this drill, two players will stand facing each other with a ball between them. They’ll each take a couple of shuffle steps to the right, switch the ball and dribble it back to the left. Now, let’s take a look at a few variations of the shuffle run that are great for keeping the drill fresh.

The zig zag run is a great footwork drill that helps players develop their ability to quickly change directions while keeping control of the ball. In this drill, a coach will dribble a ball up the field with a player trailing behind. When the coach reaches the halfway line, the player will sprint toward the ball. When the coach sees the player closing in on him, he’ll execute a sharp cut to the left or right. The coach will then dribble the ball back in the opposite direction with the player trailing behind again. Let’s take a look at a few variations of the zig zag run that are great for keeping things interesting.

The 3 in 1 soccer ball drill is designed to challenge players mentally while helping them develop their ability to react quickly. In the drill, two players will stand about 5 yards apart. One player will have a soccer ball while the other will have a bean bag or water bottle. The player with the ball will dribble toward the bottle and then fake as if they’re going to kick it. Instead of kicking the bottle, they’ll kick the ball back to the second player. The player with the bean bag will then kick the ball back toward the first player. This continues for a full minute. Let’s take a look at a few variations of the 3 in 1 soccer ball drill that keep things interesting.

Soccer is a great sport to coach and play year-round. While it is also a fun game to play, it is important to remember that it also requires a lot of hard work and dedication. To be a successful player, you need to spend plenty of time training and practicing both on and off the field. One way to keep your workouts fresh and challenging is to use soccer ladder drills in your practice sessions. Ladder drills are a great way to improve quickness and agility. They can also help you to improve your stamina and endurance. To keep your practices fresh, try mixing up the types of drills used. You can also add in variations of each drill so that they are not always used in the same way.

When you step onto the pitch, your competitive spirit and desire to win…

As a soccer player, your conditioning will directly impact how much time…

Improve your soccer skills and technique fast with these dynamic soccer…

It’s no secret that grassroots soccer is the foundation of the sport.…