Cupello announced today that it has been honoured for Best Education Websites and Mobile Sites in the 26th Annual Webby Awards. 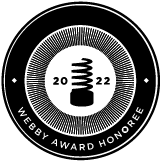 “Honourees like Cupello are setting the standard for innovation and creativity on the Internet,” said Claire Graves, President of The Webby Awards. “It is an incredible achievement to be selected among the best from more than 14,300 entries we received this year.”

Cupello is delighted to welcome Alex McLeish former International and…

Cupello has arrived! We are delighted to welcome you to our Soccer Coaching…